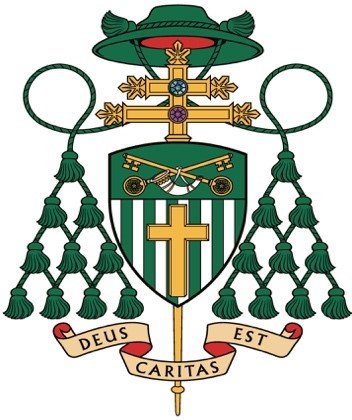 Atop the main design is a field known as the Chief. It is green. On this field, depicted in gold, appear the crossed keys symbolizing his patron Saint, Peter the Apostle.

Suspended from the juncture of the crossed keys, worked in silver and embellished in gold, is a huntsman's horn, a tribute to his Germanic heritage as well as a ('cant’ to his surname)

The main field of the shield is a Paly of twelve vertical stripes of alternating green and silver, the Hundt family colours. The Paly itself is meant to represent the furrows of a ploughed field, calling to mind Archbishop Hundt's agricultural background as well as such scriptural references as 1 Kgs. 19:19-21, Lk. 9:62 and 1 Cor. 9:10. There are twelve furrows to represent the Twelve Apostles and the Apostolic Succession to which Archbishop Hundt has been called. Standing alone on the Paly is a simple Latin Cross worked in gold, emblematic of the words of St. Paul: "May I never boast of anything except the cross of Our Lord Jesus Christ." (Gal. 6:14)

Surmounting the Episcopal shield is the pilgrim's hat, the heraldic emblem for all prelates and priests of the Latin Rite of the Roman Catholic Church. The pilgrim's hat is green, the colour of the Office of Bishop. Behind Archbishop Hundt's coat of arms is found the Metropolitan cross. The cross is worked with maple leaves in recognition of his nationality and includes two gemstones: on top, labradorite, which is the provincial stone of Newfoundland and Labrador; and below, amethyst, which is the stone of the Catholic episcopacy and the provincial stone of Ontario, his place of birth.

The motto "Deus Caritas Est" (i.e. God is love) is from 1 Jn. 4:16. These three words are also the title and opening exhortation of Pope Benedict XVI's first encyclical to the Universal Church. It situates Archbishop Hundt's call to the episcopacy within the first year of Pope Benedict XVI's pontificate and speaks to the call of the Bishop to be both preacher and exemplifier of God's love.

Office of the Archbishop

Secretary to the Archbishop