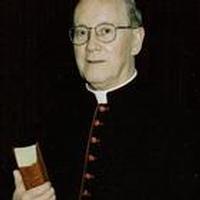 Monsignor Francis Coady was born at Petite Forte, Placentia Bay, on 26 October 1928, the son of John Thomas and Anne-Marie (Hayden) Coady. He was educated at the parish school at Petite Forte.

In 1948, he obtained a clerical position at the United States military base at Argentia. In 1949, he moved to St. John’s and obtained a position with the provincial government. In 1956, he entered St. Dunstan’s University, Charlottetown, Prince Edward Island and studied philosophy. Three years later, he entered Holy Heart Seminary, Halifax, Nova Scotia to study theology and to prepare for the priesthood. He was ordained priest for the Archdiocese of St. John’s on 13 June 1963 at the Cathedral-Basilica of St. John the Baptist, St. John’s, by Archbishop P. J. Skinner.

After ordination, Father Coady served as an associate pastor of the Cathedral-Basilica for two years, when he was appointed private secretary to the Archbishop and vice-chancellor of the Archdiocese. He was parish priest of St. Patrick’s Parish, Witless Bay (1966-1968), and of St. Agnes’ Parish, Pouch Cove (1968-1969).

In 1972, he was appointed again as vice-chancellor of the Archdiocese. The following year he became chancellor, a position he held until 1994. He was also director of vocations for the Archdiocese from 1974 to 1976.

In 1978, he was appointed an associate judicial vicar of the Halifax Regional Tribunal and established a branch office of that tribunal at St. John’s to receive and process applications for declarations of invalidity of marriage. He held this position until 1982.

In 1986, he became parish priest of St. Peter’s Parish, Mount Pearl. He moved to St. Francis of Assisi Parish, Outer Cove in 1987, and retained this position until 1993.

On 14 July 2002, Pope St. John Paul II appointed Monsignor Coady a consultor to the Apostolic Commission for the Cultural Patrimony of the Church for a term of five years.

Monsignor Coady died at St. John’s on 26 May 2016. His remains were interred in the priests’ plot at Belvedere Cemetery, St. John’s.

Located on the west side of the Basilica.

The entrance to the main office and reception is in the lane between the Basilica and the original Bishop's residence.

World Meeting of Families to be aired LIVE from Rome

Synodality Report of the Archdiocese of St. John’s